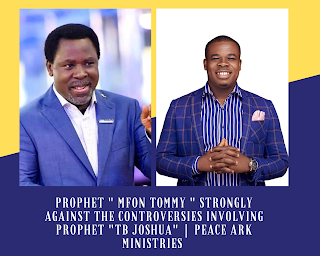 Prophet Mfon Tommy Strongly Against The Controversies Involving Prophet Tb Joshua | Peace Ark Ministries
South based Prophet " Mfon Tommy " with the mandate to  release those who are in bondage, through deliverance and revealing the secret of the devil over people's life through prophecies.
Prophet Mfon Tommy who has for long been a good follower, and observer of every principle and teachings of the gone " Temitope Balogun Emmanuel" TB Joshua". lately, has been pained over controversial issues which arose long before the death and even after the death of TB Joshua.
The most ugly part of this scenario is that "Pastors, Prophet, Evangelist, bishops, and lots more are involved in this dramatic controversy... 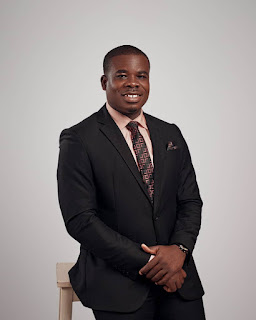 It's well recalled that when Dare, one of the sons of Pastor Adeboye died, T. B Joshua was one of the first Pastors to send his condolences and went on to observe a minute silence for the 43-year-old pastor during his church service.

Joshua had in a message of condolence to Pastor Adeboye and the Redeemed Christian Church Of God (RCCG), said the sad event would not had happened if God did not permit it, adding that He needed no human’s approval to His will.

I have been, ( Mfon Tommy) to Tb Joshua Programs and I have seen with my eyes the good works he has done, then how much more God. an epitome love (Tb Joshua) has sponsored many student even those he don't know physically, he has made shelter in sufficiency for the homeless individuals, and most of all was once encounter I had with a Muslim who was in-charge of the AC repairs in the Camp..

Obviously many Muslim who has never attended [SCOAN] Not for a day take shelter in the Camp, I mean conveniently without fear of harm...

Watch Now   This is one part of Love many Christians and so called Prophet GO's would never exhibit instead go on bias, Prophet Tb Joshua believe that we don't just show love to our like minded individuals, same religion etc. yet Gods love implies that you extend your Arms of Goodwill to many who are in need, known and unknown.

Countless times issues of this same nature has been displayed publicly, via criticism ' who's Tb Joshua Spiritual Father' 'does he have any' and lots more, but the point here is " Tb Joshua has never for once condemned the philosophy or belief in having a Spiritual father, but he is not individually a party to that Part of submission.

Just before his death, he explains and believe that we are all followers of Jesus Christ and as such our ministerial companion should not spiritual father's, mentors etc so therefore he served a God that is responsible for keeping to his responsibility as a father.

Apparently, Many believers have lost their way into wrong doctrines, Beliefs, and lots more all negative. This is because of the initial exposure to this fallacy behind God fatherism....

As my conclusion ( Mfon Tommy) I'll love to be so antagonistic and so direct without Bias " I Prophet Mfon Tommy was once a member of The Redeemed Christian Church Of God and I served there, that's not actually my focus. my concern here is I have never been anointed, Ordained to be a pastor except by God.

This was the eye opening truth I  got from Prophet Tb Joshua, Using a clear context of Prophet Jerimiah in the bible " Before you were born I ordained you ........ this complicated controversy of Ordination is what I cant fathom..

He That Thinketh he stand let him take heed less he falls....