Controversial investigative journalist, Kemi Olunloyo has again unleashed her venom unto Davido, saying he lied about buying a house in Banana Island.


Recall that Davido splashed millions of naira on a new mansion in Banana island. The singer also revealed how he was able to afford his newly purchased Banana Island home.

Kemi Olunloyo accused Davido of chasing clout using things such as his father’s private jet, the Porsche car gift to Chioma, including the Banana Island mansion he claimed to have bought.

“David Adeleke didn’t post the title of his house. You told us you are buying a new private jet, it was your dad’s. Cooking show for Chioma, never launched, Porsche for Chioma never driven, Wike gave you money to groom artists, no artist. A sick audio clout life.”, she said. 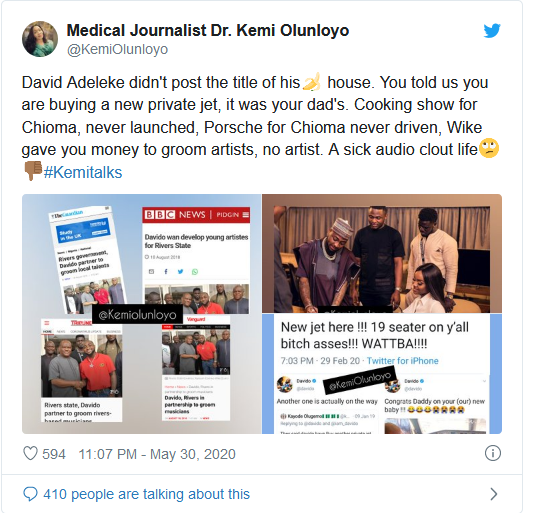 “In property law, a title is a bundle of rights in a piece of property in which a party may own either a legal interest or equitable interest. It also refers to a formal document, such as a deed, that serves as evidence of ownership. Post your title and deed papersFace with rolling eyes#Kemitalks”, she added